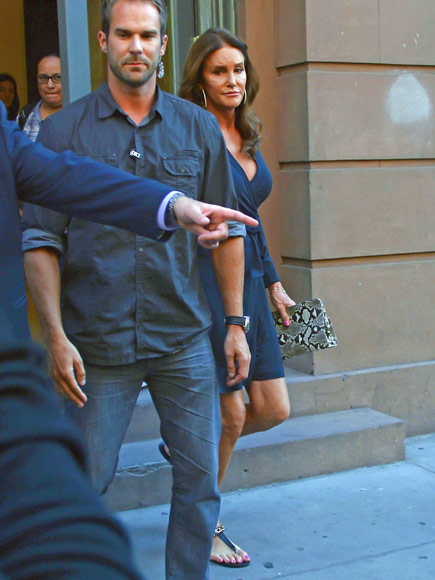 Caitlyn Jenner is on a mission.

The Olympian brought her passion for advocacy to New York City, stopping by The Lesbian, Gay, Bisexual & Transgender Community Center in New York City on Monday.

Jenner, 65, wore a sleek navy wrap dress, hoop earrings and sandals that showed off her pink toenails as she left the building.

In her revealing interview with Diane Sawyer back in April, Jenner said she longed to wear polish outside of her home, and fans rallied around her by posting photos of their own manicures with the hashtag #PaintYourNailsforBruce (her former name while living as a man).

Keep up with Pink in the pages of PEOPLE Magazine by subscribing now.

The visit caps off a fun-filled weekend in N.Y.C. She celebrated Pride on Sunday at the Dream Downtown Hotel’s PH-D lounge in Soho and grabbed a bite with a big group of girlfriends, including model Geena Rocero and actress Candis Cayne.

“Such a fun dinner in NYC w/ this powerful group of trans women,” she Tweeted on Monday. “They are all so beautiful.”

Jenner has hit the road to document her journey for her reality show, I Am Cait. She’s said she wants to be a voice for others struggling to accept their true selves: On June 12, she went to the Los Angeles LGBT Center’s Youth Center in one of her first public outings since transitioning.

Jenner “wants to help make a difference for people struggling with empowerment,” a source told PEOPLE in April. “And it’s not just about those who are transgender, but those who are bullied or face discrimination, whether it’s racial, sexual, religious, any ‘differences.’ ”

Jenner is set to accept ESPN’s Arthur Ashe Courage Award at the ESPYs on July 15.