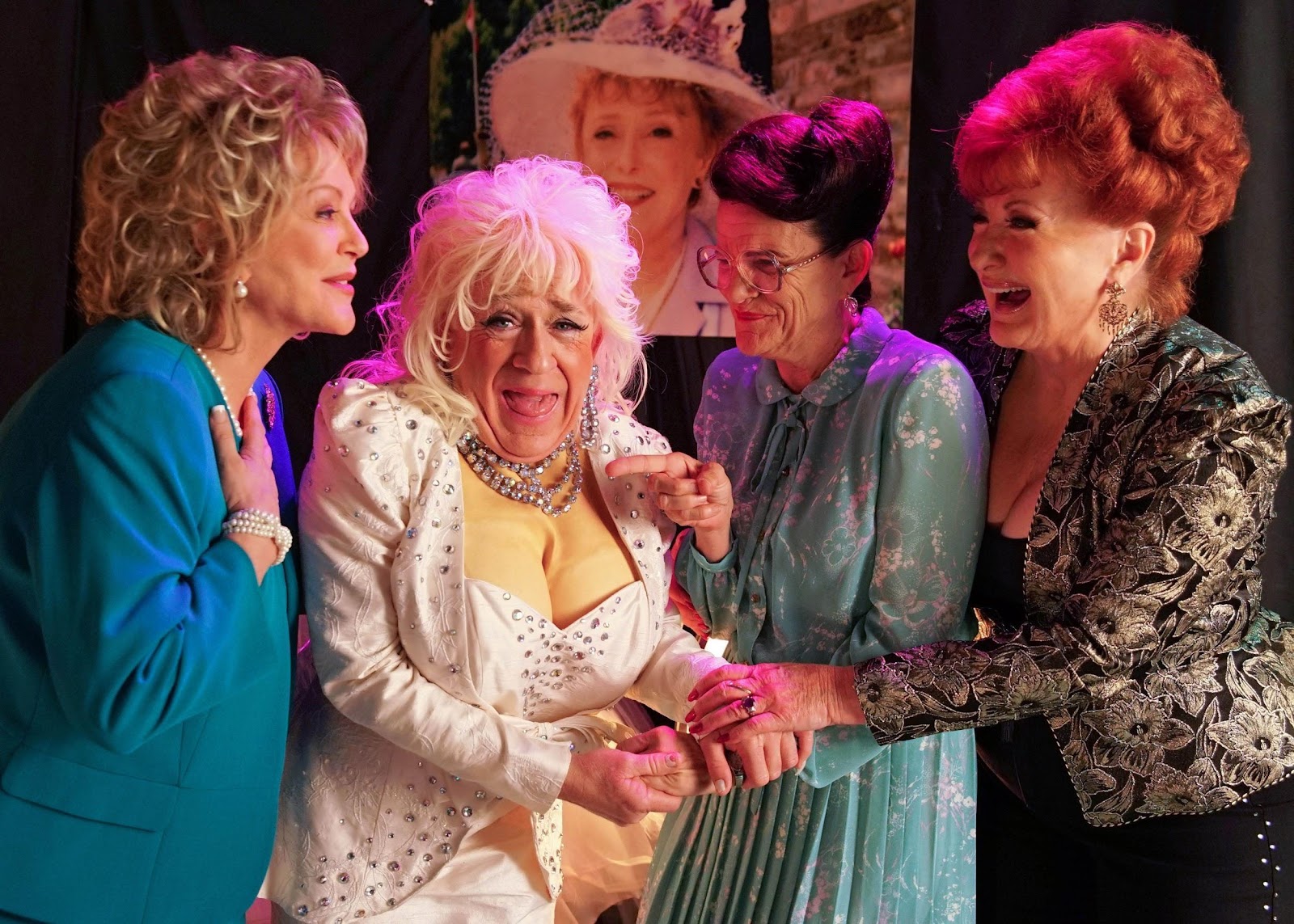 Award-winning writer/director Del Shores (“Blues For Willadean,” “Southern Baptist Sissies,” “Queer A Folk”) brings his latest film, A Very Sordid Wedding, the outrageously funny sequel to his play, movie and TV series Sordid Lives, to New Orleans for the Louisiana Premiere at Joy Theatre on Saturday, Sept. 2 (Doors open 1:00 p.m., screening at 2:00 p.m.). Sordid Lives creator Del Shores and producer/star Emerson Collins will be in-person to introduce the film and will be doing a post-screening Q&A. For tickets, visit http://bit.ly/2x447ju. For more information on A Very Sordid Wedding, visit https://www.averysordidwedding.com/.

The film brings back an all-star ensemble cast of characters, rooted in the Southern Baptist world of Winters, Texas, in the weeks following the U.S. Supreme Court’s same-sex marriage equality ruling where not everyone there is ready to accept it. Since the film’s World Premiere in March in Palm Springs, Calif., where it received the country’s highest per screen specialty box office average its opening weekend, A Very Sordid Wedding has expanded in limited release via The Film Collaborative enjoying an explosive audience response with sold-out premieres in 34 markets to date including Los Angeles, San Diego, Toronto, Dallas, Austin, Salt Lake City, Tulsa, Kansas City, Fort Lauderdale, Tampa, Birmingham, Nashville, Lexington, Atlanta, Charlotte, Pittsburgh, Provincetown and more. For further updates on the film’s release, visit http://www.averysordidwedding.com/.

The Huffington Post proclaims A Very Sordid Wedding as “much more than a wonderful movie, but a game-changer In LGBT politics,” Film Journal International raves, “If you liked the original, the overdue sequel to ‘Sordid Lives’ will both delight you and warm your ever-lovin’ heart” and The Hollywood Reporter says the film “offers some undeniably entertaining moments, and its talented ensemble, clearly encouraged to pull out all the stops, delivers their comic shtick with admirable gusto.”

Sordid Lives, Del Shores’ fourth play, opened in Los Angeles in 1996, and ran for 13 sold-out months. It received 13 “Critic’s Choice” honors and 14 Drama-Logue Theatre Awards. In 1999, Shores wrote and directed the film adaption of Sordid Lives starring Beau Bridges, Delta Burke, Olivia Newton-John, Bonnie Bedelia, Leslie Jordan and Beth Grant, along with most of the cast from the play. The movie became a cult phenomenon taking in nearly $2 million in its eight-theatre limited release. The movie won six Best Feature and 13 Audience Awards at film festivals. In 2002, Twentieth Century Fox released the DVD/Video, which has now sold over 300,000 units. The film was re-released by Wolfe Video in 2014. Sordid Lives: The Series, a 12-episode TV series prequel to the Sordid Lives film, premiered on MTV’s LOGO network in 2008.

“Not a day goes by where someone doesn’t write me asking me for more Sordid Lives. So many of my LGBTQ fans, of all ages, have come out to their folks by showing them Sordid Lives because the humor helped them share their own story,” explains writer, director and producer Del Shores. “I am excited to bring my characters up to July 2015 where they are hit with the reality of Texas having full equality. I wanted to contrast affirming churches and organizations like Faith In America with the hypocritical bigotry that is still being spewed from pulpits represented by the ‘Anti-Equality Rally’ in the film.”

“With the victory of marriage equality and the resulting backlash disguised as ‘religious freedom’ bills, our film exploring the impact of religious bigotry couldn’t come at a more timely moment in our history,” continues producer and star Emerson Collins. “Hard-fought LGBTQ rights won over the past eight years now hang in the balance with the new presidential administration and conservative state legislatures across the country preparing to target the LGBTQ community.”

As the original film dealt with coming out in a conservative Southern world, A Very Sordid Wedding explores the questions, bigotry and the fallout of what happens when gay marriage comes to communities and families that are not quite ready to accept it. Bigoted “religious freedom,” marriage equality and cultural acceptance are all explored with Del Shores’ trademark approach to using comedy and his much beloved Sordid Lives characters to deal with these important current social issues and the very real process of accepting your family for who they are instead of who you want them to be.

It’s 2015, seventeen years after Peggy tripped over G.W.’s wooden legs and died in Sordid Lives, and life has moved into the present for the residents of Winters, Texas. Sissy Hickey (Dale Dickey) is reading the Bible, cover to cover, trying to make some kind of sense out of what it really says about gay people. Her niece Latrelle Williamson (Bonnie Bedelia) has divorced her husband Wilson (Michael MacRae) who has taken up with a hot young gold digger. Latrelle’s now out and proud gay son Ty (Kirk Geiger) is on his way back to town with his black man and news of their own. Her sister LaVonda (Ann Walker) is still cussin’ and drankin’ and is being blackmailed to sit with the sick and afflicted. LaVonda’s best friend Noleta (Caroline Rhea) meets a hot younger man while visiting her awful mama in the hospital. G.W. (David Steen), sporting new fiberglass legs after Noleta burned his old ones, is still feeling guilty and mourning Peggy. Nearly incoherent barfly Juanita (Sarah Hunley) has moved from her obsession with Vacation Bible School roosters to the royal family while Wardell (Newell Alexander) and Odell (David Cowgill) still bicker at the bar. Tammy Wynette champion Brother Boy (Leslie Jordan) hasn’t been back to Winters since Peggy’s funeral, and he’s working at a tragic little gay bar in Longview, having added Loretta and Dolly to his new medley act “We Three Queens of Oper-y Are” till a chance meeting with a dangerous criminal forces him out on the run. As the sordid saga continues, an anniversary memorial service is being planned in honor of Peggy at Bubba’s Bar while the Southside Baptist Church is planning an “Anti-Equality Rally” to protest the advancement of same-sex marriage, spearheaded by Vera Lisso (Lorna Scott) and Mrs. Barnes (Sharon Garrison). Both events are to take place on the same night, so the cast of colorful characters are all on a collision course for shenanigans and fireworks, and a surprise wedding!

Shores has written, directed and produced for film, network and cable television, and theatre. His most recent film, a hybrid adaptation of his GLAAD Award-winning play Southern Baptist Sissies, won fifteen film festival awards including eight Audience Awards and is available on all platforms. His film, Blues For Willadean, is an adaptation of his NAACP Award-winning play The Trials and Tribulations of a Trailer Trash Housewife starring Beth Grant, Dale Dickey and Academy Award-winner Octavia Spencer. A film adaptation of his play Daddy’s Dyin’ (Who’s Got The Will?) was released by MGM and Propaganda Films. Shores wrote and directed the film version of his play Sordid Lives starring Beau Bridges, Delta Burke, Olivia Newton-John, Bonnie Bedelia, Leslie Jordan and Beth Grant with many of the actors from the original stage cast. Sordid Lives: The Series, a television series prequel to the film, premiered on Viacom’s LOGO network in 2008, and Shores created, wrote, directed and executive produced all 12 episodes. Shores’ seven plays have run for over six years collectively in Los Angeles where they all premiered and won numerous awards from GLAAD, the NAACP, the LA Drama Critic’s Circle, LA Stage Alliance, LA Weekly and Backstage.

In association with Buffalo Gal Pictures

Written and directed by Del Shores

Check out the events in this year’s Southern Decadence!